Any given day, the world is woozy with evil.
A forensic surgeon oversaw dismantling after;

Is it any wonder that we’ve left off praying for
anything but our deliverance from such a place?

In the absence of Deity or justice the dead have
raptures of stars to rinse a dark earth in starlight.

above the cries of coyotes on Wisconsin marsh land.
A light show rooted in its location above the planet.

I knew where I had ended up when atmospheres
flowed like runoff to the river and out to the sea.

It isn’t so much another man has died for a cause.
It isn’t even that a republic of coyotes is singing.

on recordings the Turkish authorities release
there are, first, raised voices. Then screams. 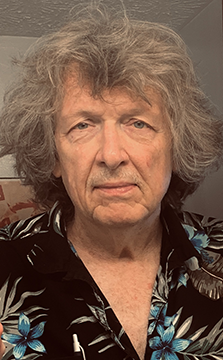 ROY BENTLEY, a finalist for the Miller Williams prize for Walking with Eve in the Loved City, has published eight books; including American Loneliness from Lost Horse Press, who is bringing out a new & selected. He is the recipient of a Creative Writing Fellowship from the National Endowment for the Arts and fellowships from the Florida Division of Cultural Affairs and the Ohio Arts Council. His poems have appeared in Cleaver, The Southern Review, Crazyhorse, and Shenandoah among others. Hillbilly Guilt, his latest, won the Hidden River Arts / Willow Run Poetry Book Award and will appear next year.