A unique feature of the American Constitution lays in its articulation of the necessity of civilian control and oversight of the American military. In the field of contemporary American War Poetry, represented by such works as Brian Turner’s Here Bullet, and Brandon Courtney’s Inadequate Grave, Nomi Stone’s Kill Class provides a much-needed civilian perspective and a degree of civilian oversight to the projects of these warrior-poets. As such, the collection stands astride a crossroads and serves as a translation of the military (particularly US Army) experience and makes the covertly conducted and purposefully eschewed performance of Military Operations in Urban Terrain (MOUT) training exercises legible to wider public by making emotional sense of paradoxical position American servicemembers are placed in. Deploying a discourse on language, as the medium for her exploration how, in this military schema, human lives are translated into mere intentions, and then sorted based upon these presumptions. In “War Game: Plug and Play,” she notes:

…The people speak
the language of a country we are trying
to make into a kinder country. Some
of the people over  there are good /
others evil` others circumstantially

Yet, as much as her verse is a translation of the military experience into an affective register legible to the civilian mindset, it is also an exploration of how soldier, civilian, nation-state and even the topography where these identities converge are all translated in terms of each other into a new organic whole. In this translated, hybrid identity, Stone generates a landscape honed to a point—the literary equivalent of an invading military power’s spearhead assault. This is best at play in “Waking,” which serves as a geographic volta for the collection’s second section:

Bullseye, the sun takes
Pavement and upturned
Faces equally. Do not blame it
For knifing each next day open

Yet, and often within the same poem, she is able to handle these characterizations with the same deliberate softness that allows the populace of a nation to reject its involvement in a conflict as a matter of public policy while not attributing such policy failures the individual service member. Stone’s voice captures the thrust-ness of the combat situation in which—particularly on today’s battlefields—combatants and civilians alike become unwitting participants. 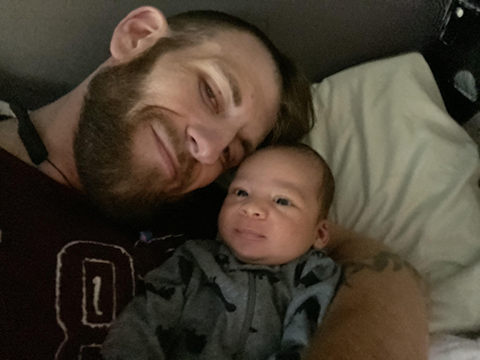 AARON GRAHAM hails from Glenrock, Wyoming, which boasts seven bars, six churches, a single 4-way stop sign, and a population of 1159. He has twice served as the editor of the Squaw Valley Review. Graham is a veteran of the wars in Afghanistan and Iraq where he served with The Marine Corps’ Human Intelligence and Counterterrorism Task Force Middle East as an analyst and linguist. He is an alumnus of Squaw Valley Poets and the Ashbury Home School and was the Cecilia Baker Memorial Visiting Scholar at Seaside Writers. His collection Arabic with a Redneck Accent won the Moonstone Center for the Arts Poetry Prize and his newest collection Casualties is forthcoming from The Main Stree Rag. His poetry has won the Penumbra Prize and f(r)iction Magazine‘s Best Poem for Summer 2017, and he has been nominated for Best of the Net. Aaron is working on a PhD from Emory University and an MFA in Poetry from UNCG. He resides in Greensboro with his amazing wife Alana, their three daughters Alexi, Nora and Naomi, and their brand new baby boy, Aaron Jr.