No One Said Shit

The creek on 2nd Avenue smelled like diarrhea. I was friends with all the neighborhood boys growing up and the summer we were ten years old I would follow them to the creek, where they would stick out their necks and let their noses bob in the air like hound dogs. At that age, it was cool to like things that stank and to be around things that stank and to stink yourself. Or it was cool for the boys, at least, and as the only girl of the group I put up with it. There was a sign that said CAUTION: SEWAGE by the creek and it was covered in mold. A running gag called “scratch and sniff” involved scratching the mold with your finger, sniffing it, and saying, “Smells like diarrhea.” That was north Florida for you.

The house I grew up in had trees growing in different directions in the yard. The kitchen floor sloped, so everything you dropped would roll to the lowest point, which was the corner beside the refrigerator. My mom was a baker and sold her pies at the farmers’ market every week, so that sloped corner of the kitchen was always piled with her droppings. Blueberries, pecans. My dad always said the house was built on a sinkhole. People who aren’t from Florida are impressed when you say you grew up on a sinkhole, but back then, it was just facts. “Just facts” is what my mom called it. “A fact is a fact,” she used to say, “where you like it or not.”

Here’s a fact: Miller Hines once pooped in the creek that smelled like diarrhea. There was a big pipe that drained into the creek. The pipe was surrounded in concrete, so you could stand on the concrete lip above the pipe and look down over the water, through the cloud of gnats. I was there the day Miller Hines said, “Watch this,” and got up on that concrete perch, letting his butt hang over the edge. I remember his testicles being kind of squished together and looking like an apricot. This kid named Ethan Bell, who ended up becoming a professional motocross rider with energy drink sponsors and everything, joked that I should get up there next. Probably because Ethan already had hairy legs by the age of eight and wanted to see what a girl looked like down there. I just glared at him and said, “Zap,” which shut him up.

“Zap” was my go-to threat because my dad was a meter reader for the city. He found meters in the overgrown corners of people’s yards and saw how much electricity they used, but since nobody knew what meter-reading meant when we were kids, I told everybody that my father could electrocute people in their sleep.

When Miller was finished, he pulled up his shorts. You couldn’t even smell the poop in the creek because it already stunk, but everybody pretended they could.

There was a metallic sheen on the water. It flashed purple and green, like gasoline in a parking-lot puddle.

Then it happened. A boy named Colin Beauchamp, who had dark hair freshly buzzed for summer, rushed forward and pushed Miller Hines into the water. Nobody was expecting it. I wasn’t. These were not violent boys I was friends with. They talked a big talk, but that was about it. They were roughest on themselves, jumping out of trees and grabbing snakes and taking hard falls off their bicycles, but they didn’t hurt each other often. Maybe it was because they didn’t want to get in trouble with somebody else’s mom and dad. There was a shame in that, whereas getting in trouble with your own parents was expected and somehow easier.

Miller screamed bloody murder when he broke the water. In a fit of pure panic, he flailed and blew water out of his mouth. He kept his eyes shut as if he was afraid of going blind and now, years later, that is how I remember his face, water rolling down the smooth, tanned skin. Hair sticking to his forehead. Worried eyebrows and long eyelashes clumped together and wet and shining. Upon reaching the bank, which was a thick paste of sand, ground leaves, and weeds, he held his arms outstretched in good faith, waiting for someone to offer him a hand and lead him to safety––but nobody did. We were all too afraid to touch him. He was tainted. He was soiled. It was one thing to smell him, to breathe in the stink and feel strangely empowered by it in our youth, but it was another thing to make physical contact. Just like messing with roadkill. We never touched with our bare hands, only poked with sticks and toed with our tennis shoes.

He grabbed handfuls of the bank, pulling himself up, eyes still squeezed shut, and pulled and pulled until he was on clean grass. He rolled on the grass like a dog, except dogs rolled in poop because they got some pleasure out of being dirty and Miller rolled because he wanted to be clean. “I got poop on me?” he asked. “Is it on me?”

There wasn’t any poop on him. He was just soaking wet and shaken, although his formerly white t-shirt did look yellow now, like it had been stained by all the rot in that water. I felt bad for him. But a lot of good that does Miller Hines now.

When it became apparent nobody was going to comfort him, that nobody had an ounce of maturity in order to help another human being, he opened his eyes and stood up. He sniffed hard, as if to say, “We were never really friends at all,” and then started walking home. He rolled his ankle in his soggy tennis shoes, but kept going. The boys looked up at me, because I was a girl and, accordingly, the closest thing to a parent among them. I was supposed to be the voice of reason, morality itself. I said the only thing I could think of: “Shame on you, Colin. Go home and tell your mother.”

“If you can push Miller, you can tell her.”

The group rallied behind me. We sent Colin home, which was more of a gesture than anything else. I’m pretty sure Colin never told anybody what happened, since he never spoke of any punishment after the fact. Things might have turned out differently for him if he’d ever received any discipline in his life, but his dad was off being a fishing guide on the Yucatan, or at least that’s what Colin always said, and his mom was busy raising his younger siblings, every one of them with a different father. I don’t think the group cared that he actually told his mother what he’d done to Miller. We just needed to send him off, to pretend like we had some decency, which is funny because I don’t think anybody else considered telling their parents what happened. It was just another one of our games, I guess, sending him on that pretend walk of shame.

We assumed that Miller was in hiding when nobody saw him for a few weeks. Embarrassed probably and also pissed off. I didn’t blame him for hating us. And then I finally got a piece of information. At supper one night, my dad mentioned that he’d run into Miller’s father and Miller’s father had said things were not looking good for Miller. My mom looked mad, probably because the two men meeting meant my dad had been at Lillian’s, a bar, where he was not supposed to be, and she also looked mad because she hated to hear about anything bad happening to anybody. Her sadness was enacted as anger, a trait I have also inherited. She cut into our dessert hard and flakes of pie crust flew across the table.

After supper, I went into my room, took out my yearbook, and colored my picture over with a red Crayon. This is when I should have gone to Miller’s house, to visit him, to apologize, to do something nice. But, you know . . . I stayed in my air-conditioned room, surrounded by my toys and books and pillows, with the lazy smell of strawberry and rhubarb hanging in the air.

Not long after that, my mom asked me to sit with her. She started off by saying that it was okay for me to cry, which is when you know it’s going to be bad. Then she said that Miller Hines had died. She said, “I know he was your friend,” and that was the moment I was supposed to cry. I didn’t. I went out the front door and headed straight for the creek on 2nd Avenue. One by one, all of the boys showed up, too, as if the whole thing was choreographed. We were young and stupid and unable to process whatever emotions eked through our little bodies. When you’re a kid and you’re upset, there aren’t that many things you can do. You can go to your room. You can ride your bike. You can sit by a creek. We looked in the water and said every cuss word we could think of it. Fuck. Bitch. Piss. But no one said “shit.”

Colin, the one who’d pushed Miller into the water, said, “I did it to him.”

No one argued. I could have said something like “we all played a part in this,” except it was easier to just cuss the water.

When our parents had told us about Miller, they said an amoeba had gotten in his brain and killed him. They said he got the amoeba from a water park outside of Orlando one weekend, but we couldn’t believe that. It wasn’t the truth of our guilt. Colin, who I stood beside during our creekside vigil, died from a heart attack at age twenty-seven because he’d been smoking heroin. I got pregnant with his child once and had an abortion. What came out was like a bloody apricot.

We are still rough on ourselves, rougher than we are with other people. It’s not good for us, but it’s better for everyone else. I say that, but I think of Miller Hines’s mother and how she barely left the house after he died. She had a captain’s nest at her house, a little platform that rose above the trees. She would go up there and look over town. Leaning on her elbows, squinting in the heat. I’m not stupid enough to think she was really looking for something, or that she was hoping to see a glimpse of her child’s ghost. I think it was just something to do, which is what I am looking for every day. 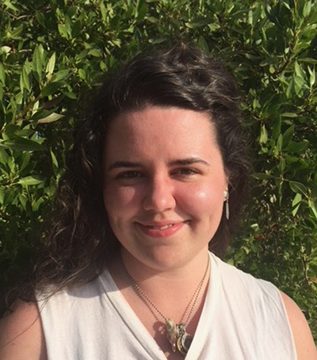 WYNNE HUNGERFORD’s work has appeared in Epoch, Blackbird, The Brooklyn Review, Iron Horse Literary Review, American Literary Review, The Normal School, The Boiler, and SmokeLong Quarterly, among other places. She received her MFA from the University of Florida. You can find her online at  www.wynnehungerford.com.