After around fifteen opportunities of storySouth allowing me shine my penlight on various authors and their collections, this is the first time I have had the opportunity to see a familiar name come to the table for a second time. With Eagle & Phenix, Nick Norwood picks up where he left off in Gravel and Hawk in a way that continues the journey of an observant, isolated boy in the south, but finds new landscapes moving from the farmland flats and oilfields of Texarkana in his previous book to the hills and Chattahoochee River of Georgia which may be a bit more populated, but still leave us with the isolated, keen-eyed boy from before, just in perhaps a more present and less nostalgic way.

I also have to say, right up front, that Eagle & Phenix itself (whose title refers to the Eagle & Phenix Mills rebuilt in 1866 after having been burned by Federal forces in 1865) contains a story of resurrection for a family after the loss of their patriarch. By building on the stories of Gravel and Hawk, this helps compel the family forward. Years ago, when I was reading Gravel and Hawk without much context, I wondered why a few of the poems were so reticent with important narrative details; it was one of my few complaints in a review of an otherwise rock-solid colleciton. With Eagle & Phenix Norwood carries the spirit of its predecessor, but by shifting to the maternal lineage of his family (the family has lost the father, an oil-field pilot in the course of Gravel and Hawk), the poems feel much more forthcoming. In seeing the books side-by-side now, I still enjoy the way in which these newer works yield a little more to the reader, but also have a better understanding as to why some of the pieces previously had been more reserved. Simply put, the speaker had less time with his father and at a younger age, so the nature of the father’s job as a pilot (even coinciding with the space race and moon landing), it would make sense that his loss would magnify the father’s image to more mythological and unapproachable proportions.

Contrastingly, Eagle & Phenix begins with the speaker’s mother and their new life from line one. “Ronnie’s” opens the collection with a new decade and with a new head-of-household beginning a new stage of her life that takes into account the steps necessary to ensure their survival, but also remembers a sense of herself:

Dad dead, Mom—back in the bank, tellering—
started dressing in cute skirts and pants suits
he sewed herself from onionskin patterns
and bright-colored knits picked-up at Cloth World.
Got her dark brunette hair cut in a shag.
And she and her single girlfriends from work
on a weekday night would leave me to “Love
American Style” or Mary Tyler Moore
and step out to hear the country house band

Already, we can see how rich the detail is this poem, viscerally, but also how telling of the time and the characters involved. Details like the pants suits sewn from Cloth World onionskin patterns, the shag hairstyle, the shows on TV, even the country house band give me exceptional insight into these characters, the time in history, and the place in the country. It’s such a strong first note of the collection as we see a man’s recollection of his mother at twenty-seven or twenty-eight, already having lost a husband, trying to pay the bills and make a life for her family, but also being a woman of the 1970s who was still young, perhaps finding herself all over again under new circumstances. Loss precedes and shadows over everything, quite literally the first words of first poem of the collection, but life continues as the “latchkey” childhood of the speaker grows into an adulthood that includes a college-aged child (nineteen in “In a Deer Stand with My Daughter).

The overall progression of the collection facilitates this personal journey as it eventually moves (roughly, of course) from a childhood focus to family across known generations (from grandparents to the speaker’s own daughter) before eventually the setting and then the histories of Georgia become characters of their own. It’s as though the nervous, isolated boy who lost his father is maturing in the course of the collection’s subjects until the reader is available for the journey back to the destruction Eagle & Phenix Dam during and its resurrection right after the Civil War.

As someone who spent the majority of my life in Georgia (at the very least, the most memorable years of my childhood and early adulthood), I can say that I recognize these landscapes, these people, and I’ve heard some of these histories. After the appearance of the titular dam, in poems that continue to unfold variations on the Eagle motif, we find a piece like “Eagle Watching,” and if you’re ever been in Georgia and have been fortunate enough to have seen an eagle, I imagine it would be hard to not recognize lines such as:

I gazed across the Chattahoochee
as she skimmed her shadow
over sloped banks crawling with kudzu,
saw her snatch a sunfish

from its given, giving world,
wormhole it out of time mid-swim
and cart it aloft to be stricken
in the bright white air.

This is a world I know, but it’s also a bridge to the world of Nick Norwood. Rich in character, full-voiced and kind, a latchkey kid who found his way by watching and learning. Whether it is in the series of odes and elegies for his small family opening the second section or the historical poems that come later, the clear vision of these poems set an image-rich field to gaze upon and the generous curiosity and inquiry of the speaker helps those find a greater significance than simply the accumulation of detail. Ultimately, even in the wake of great personal loss or even in observing the haggard or worn-out around us, there is still the glint of a life that refuses to be overburdened until its last days. Looking upon “Three Palm Trees on Railroad Street,” as the speaker bikes past all the run-down buildings and fixtures of rural industry, he is struck by the sight of these haggard pals and stops to observe:

Then these fellows,
their fronds sooty,
graying, and yet bring-
ing me such dingy,
delicious, unexpected
joy, I have stopped
to stare and forget
about where I am
and consider instead
how—however they
came to be—three

And this is what Norwood does so well in his poems. He not only can see things for what they were, in great detail, but finds joy in learning “how—however they came to be.” So don’t stop and just take a look at one of his books; maybe take the next step of fandom with me and see how “[…]three / of anything make / a row, and how what / survives may bless / by simply being here.” Nick Norwood makes collections that are built to survive and to keep blessing us with the survival of each memory, each detail he shares. 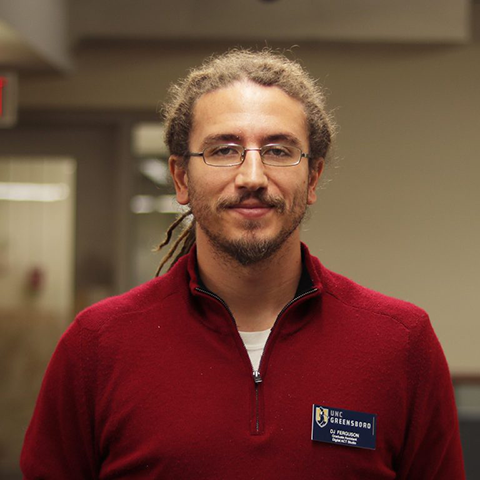 DJ Ferguson is an MFA candidate in poetry at the University of North Carolina at Greensboro where he currently serves as a consultant for the Digital ACT Studio.