How to Stay Healthy

(2) Scarf the neck. Also straightforward, but often overlooked. The ancient Chinese believed a brush of wind across the windpipe stole away one’s spirit. That’s maybe not untrue. Build a great wall like they did around your neck. Wait. Perhaps this is facile, reductive? A glib trivialization of a whole and awesome culture? Maybe. Because now I’ve read five Wikipedia entries, five or six, and none discuss the Chinese building anything around your neck.

(3) Rinse the nose. So, I confuse Stephen Dorff with Ethan Hawke all the time. Also Neve Campbell with Natalie Merchant, and Joseph Gordon-Levitt with Topher Grace. Is it just me? Oh and, like, irrigate the insides of your head with warm salt water using a neti pot or a squeeze bottle. Germs can’t take root if you hose them away and salt the soil.

(4) Gargle the throat. Do the same to the throat as you’ve done to the nose. Wash it off and salt it down and—

I have to stop here. I have to digress. I can’t be the only one noticing that it’s like genes went afreak a certain number of years ago and spawned whole regiments of quasi-twins. Nathan Fillion and Brendan Fraser? Josh Hartnett and Channing Tatum? Celebrities, most of them. Surely the fame isn’t pathogenic. Surely it just happens to flush out a sizable sub-population for observation. And mass skeeving.

(5) Don’t touch the face. I get they don’t look alike, but they look alike.

(6) Don’t touch the world. The world is germs. Open doors with your stuck-out rump. Push buttons with your elbows. Also, let’s be real: they look more alike than the me dining on a reservation in narrow shoes versus me the next morning, freshly woken, sleep-rumpled and rough like a thick-hided herd animal. Also Natalie Imbruglia and Kylie Minogue, and Matthew Perry and Peter Sarsgaard, and Seann William Scott and Steve Zahn. I could go on.

(7) Drink eight glasses a day. And I can’t tell you anything about hydration you haven’t already heard. So beating the hydration drum is not important. What’s important is this: Are we supposed to be able to them apart? Without the help of quantum computing? Colm Meaney, John C. Reilly, what? I swear the expectation is unreasonable.

(8) Sleep eight hours a night. Adequate sleep is the third best immune support. Second best is drinking eight glasses of water a day. Best is this: we must cast off the collective pretense that these people can be told apart. Stop the lies. Tell the emperor we see his ass plain.

(9) Wear a mask. Do you and I, dear reader, owe the world some special obligation? Are we, of all people, duty-bound to remain uniquely identifiable? When Jeremy Irons and Donald Sutherland could give a shit? No. Let us wear masks that look almost like us but not quite. Let us show them how ridiculous.

(10) Beware of people. Especially the doppelganging connivers with their fraud faces. If you can’t avoid their likes altogether, at least plan ahead for the scenario. Picture it. You stroll down a sidewalk, minding your own business, when you encounter Elijah Wood and Tobey Maguire.

They light up. How are you? they say. How have you been?

Did you finally make that trip to Crete?

What? You don’t know Hollywood types. You hang out with Ed Ramos, who burps into his shirt by tugging the collar forward and up.

Crete? they say. Remember? You’d had a bad run with dengue fever and were planning Crete to treat yourself?

You shake your head. I don’t—

It’s okay, you say. No problem.

It’s not a problem. Except you look EXACTLY like Gary. Doesn’t he? Hello?? Gary???

They are examining you with moon eyes. They are talking too loud, like there’s a cave in your head containing Gary, shivering against the back wall. Self-wetted for the immediate heat. So short-sighted sometimes, Gary.

Resist the urge to touch their faces very fast and very hard. Walk away. Go home and get some sleep. Most important, understand well you don’t look like Gary. You’re nobody’s quasi-twin. You are singular, replete. Put the contrary possibility out of your mind. Keep your distance from our fallacy of a world and all its degrading implications. 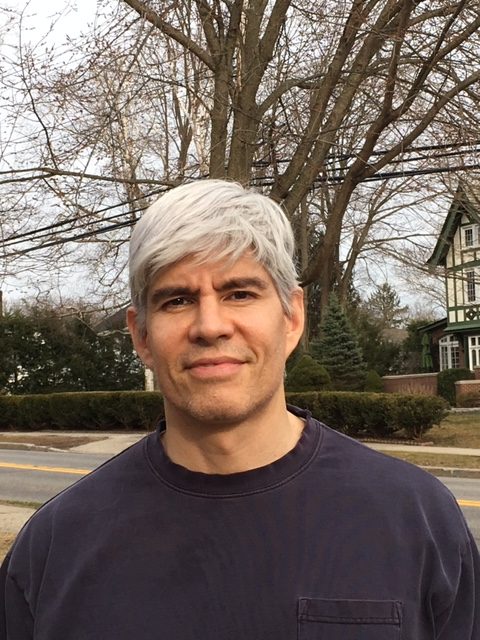 George Choundas has fiction and nonfiction in over fifty publications, including The Best Small Fictions. His short story collection, The Making Sense of Things, won the Ronald Sukenick Innovative Fiction Prize and was shortlisted for the Katherine Anne Porter Prize in Short Fiction, the Robert C. Jones Prize for Short Prose, and the St. Lawrence Book Award for Fiction. He is a winner of the New Millennium Award for Fiction, a former FBI agent, and half Greek/half Cuban.