I blamed my mother for being known for those two words. When she wasn’t watching hours of Do-It-Yourself videos on YouTube, she was always threatening to upend our house. Now I never believed her when she’d raise a cup of coffee above my sleeping brother’s waist, lift a hot cast iron skillet over my father’s head, or dangle my Xbox out the window, but “Don’t Momma!” would fly out of my mouth with a life-and-death urgency. She’d smile and say, “Stop taking away all my fun,” before stomping off.

But the day I questioned whether I was wrong was when she emerged from the kitchen with a hammer in her hand and threatened to break my Xbox into a thousand pieces.

I flung the controller away from me.

But I couldn’t help but wonder where we were going. It was Saturday. It was only us in the house. My older brother Jerome was at football practice, my father was at his auto shop, and my Aunt Precious, my mother’s sister, wasn’t outside because you’d hear the bass from her car slapping our house.

My mother couldn’t drive. She refused to get a driver’s license since she worked at the University of Maryland, which was less than a five-minute drive from our house in Adelphi. So she forced my father to take her to work. The other times, she’d take a taxi or convince my Aunt Precious to come pick her up. My aunt was always free, like she didn’t have a job and could do whatever she wanted. She always smelled good and dressed like she wanted eyes to stare at her. When I asked my mother what my Aunt Precious did for a living, my father raised his eyebrows. “Your sons should know,” he said. To which my mother declared: “I’m trying to raise my family. It’s not my business what she does in her apartment.”

I hurried down the hall. I knew we weren’t walking. Our neighborhood was safe, but not that safe. Though the local news reported extensively on any crime committed near the campus, my parents worried about MS-13 lurking around us and in nearby Langley Park and Hyattsville. But maybe the African taxicab driver that had a crush my mom would be waiting for us outside. He would sometimes give her a free ride if she would call him directly, and he’d flirt with her the whole way, finding a way to connect anything he could to his native land, saying, “In my country…” He’d often pretend I wasn’t sitting next to her in the taxi, but then sometimes he’d wink at me as if to show me he had my mother right where he wanted her.

When I caught my mother kneeling in front of the large safe in my father’s closet, I froze. My father didn’t trust banks and always knew if somebody had turned the dial. My mother must have felt me staring at her because she shot her eyes at me. She said, “Don’t you ‘Don’t Momma’ me neither. Mind your business.”

But I couldn’t stop staring at her hand, the way her eyebrows furrowed as if she was trying to remember the exact numbers my father turned the dial to. Those two words finally limped out of me.

You should have seen the look she gave me. I’d seen that look before and backed away. But I peeked out of my room when I heard the buzzing sound of the safe unlocking. I held my breath. My mother stuffed something heavy quickly into her purse. Then she moved a duffle bag in front of the safe and shoved money into it.

I got dressed. I found my mother at the front door waiting for me. She must have hidden the duffle bag. She still had that look on her face—the look she’d give me anytime I caught her secretly counting the bills in my father’s wallet or  smelling his clothes.

Once outside, my mother had an end-of-the-world stride about her. But there was no taxi, no Aunt Precious. Only the two broken-down cars to the side of our driveway, my father’s projects. My mother approached the cars. I figured something had happened to Jerome. Why else would my mother prop up the hood of one of my father’s projects and order me to get his toolbox?

I tried spying on my mother through the windshield. I pictured her doing even more damage to the car. Then the hood slammed shut and my mother climbed in.

But she didn’t say anything. My mother just sat there, gripping the steering wheel, staring out the windshield. I could hear her long breaths, the hard journey they took as they traveled through her body. She saw me staring at her and snapped out of it. She pulled out a small screwdriver from her pocket and lowered her head below the steering wheel. I couldn’t believe what I was seeing. Unscrewing a small panel, my mother was attempting to hotwire the car. Had she seen this on YouTube? I watched as she worked with a pair of piers, pulling the different colored wires apart, stripping back the coating. I wondered if all mothers had hidden skills that they only deployed in emergency situations. I didn’t know what our emergency was, but when she tapped two wires together and the car roared to life, I was terrified.

My mother drove as if stopping was optional, and my heart was doing kung fu inside of me. The car lunged forward down New Hampshire Avenue like a little kid being dragged by a giant dog. All the cars around us blared their horns. Luckily, my father’s auto shop was on a side street off New Hampshire Avenue, not far from our house. But when she slammed on the brakes in front of my father’s shop, the two bay doors were closed. The longer we sat there, the more it felt like the shop had never opened that day. There were never slow times with the shop being so close to the university. Some customers would practically beg my father to squeeze them into his schedule. Those were the cars that he brought home, working well into the night in our driveway with Jerome, the two of them working with portable lights. I never showed an interest in what he did, and my father never disguised the disappointment that I wouldn’t grow up to be like him.

Soon we were on the road again—heading back down New Hampshire Avenue. My mother seemed less nervous behind the wheel now. But she was driving very slowly. There was something seriously wrong with the car. Cars passed us, the drivers glaring at my mother, pointing their fingers at the front of the car. Whenever I saw a police car I kept my eyes straight ahead, hoping they didn’t see all the smoke spewing from the hood. When we finally merged onto Route 29 toward Silver Spring, it felt like we were getting closer to wherever it was we were going. She took the Briggs Chaney exit and then drove down to the end of a street that had apartment complex after apartment complex. Minutes later, my mother pulled into a handicap space in front of an apartment building, slammed on the brakes, and strode out of the car without speaking. I watched as she approached the building, her pocketbook clutched tightly in her hand. I swiveled around in my seat, studying the buildings, looking around at all the other cars. Then I spotted my father’s black SUV.

I dashed into the building after her, up three flights of stairs, and was behind her as she started rooting in her purse. She was startled when she looked up and saw me, as if she’d told me to stay in the car in her head but had somehow forgotten to say the words.

Out of her purse, my mother extracted something that looked like a nail file and an L-shaped tool. The people that walked behind us pretended not to see my mother attempting to pick the lock on apartment 4B. I tried not to say, “Don’t Momma,” but it didn’t work. She stopped, but not because of me. She listened for sounds on the other side  of the door.

I whispered, “Where are we?”

But she didn’t answer. She went back to working the lock, and before I knew it, the door opened.

It was so quiet when we stepped inside.

The apartment was small, dark, and smelled faintly of flowers. At a quick glance, everything seemed in perfect order. Then slowly I noticed the white silk robe near the front door, the work boots seemingly kicked off, the clothes sprinkled like confetti down the hallway. There was only one place to go. I followed my mother down the dark hallway.

For a while we just stood there, like ghosts. Like the blood had drained out of us and we were as pale as those apparitions in movies and now our purpose was to haunt the world. We couldn’t see the faces beneath the sheets, but we heard the moaning, saw the flashes of legs, and feet, and fingers. Then I heard a sharp, s-l-o-w click. I turned and saw my mother holding a gun. And slowly, the bodies stopped moving. My father and my Aunt Precious emerged from the sheets.

My mother moved the gun from my aunt, who quickly covered her face with the sheet, to my naked father, who stared at her with wrath in his eyes. But when my mother’s face remained unchanged by the muscles flexing in his jaw, he slumped back against the headboard. Then he looked at me. I saw in my father’s face the two words he wanted me to say, but all I saw at that moment was how my mother had gripped the steering wheel, how she’d stared out the windshield, how she’d frantically driven the car. I said nothing and my father’s face crumbled. My mother turned to study me. Maybe she brought me along so that I’d change her mind. But maybe she was also grateful I saw how hurt she was. Or maybe it was because she saw some new ugly thing forming in me. When my aunt finally lowered the sheet and revealed her face, my mother didn’t shoot. She lowered the gun. And we left. Our car was long gone, but we kept on walking as if to see where life would take us next. 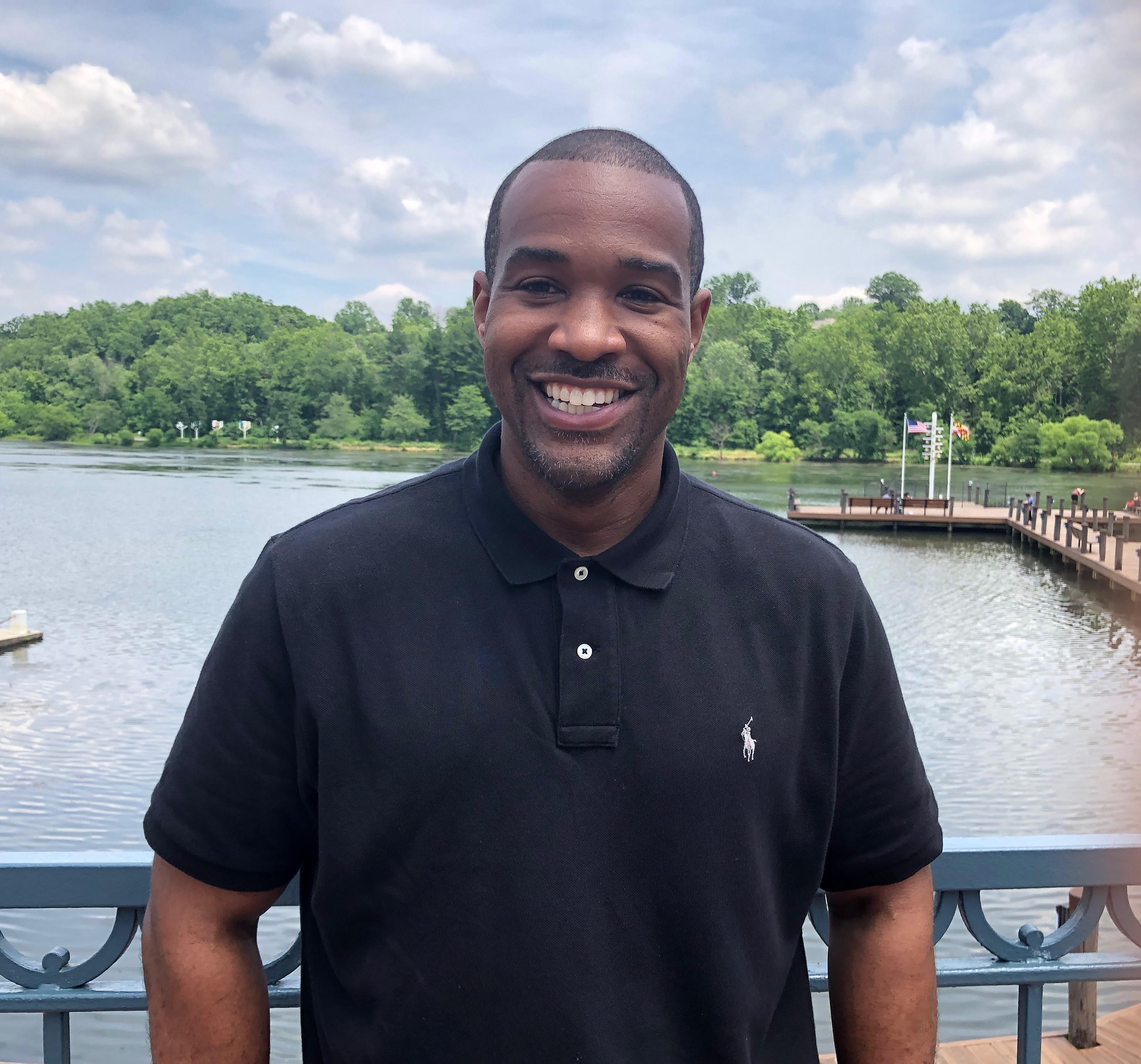 Kenneth A. Fleming’s short fiction has been a finalist in Glimmer Train’s Family Matters contest, Pleiades’s 2018 G.B. Crump Prize in Experimental Fiction, and Booth’s 2020 Prize for Unexpected Literature. He holds an MA in Writing from Johns Hopkins University, and he has work in Shenandoah and Joyland. He is the South Editor at Joyland and is currently finishing up a collection of short fiction. He lives in Maryland. You can find him on Twitter @kflemingwriter.