In a rented tiny house on a four-acre hobby farm in Wildwood, Georgia, I sit and think about Nicole Stockburger’s Nowhere Beulah. Here, a mere twenty minutes from my home in Chattanooga, Tennessee, I can hear the nearby interstate traffic, Alabama bound, as well as the braying goats a pasture away. I can almost imagine myself in the “nowhere” of Stockburger’s Surry County.

To call a place “nowhere” seems, at first, an insult. But for those who grew up in or have chosen to live in “nowhere” places that don’t attract tourists or highway expansion or visits from politicians, there’s a pride in finding the somewhere status in a nowhere place. It’s sometimes wise to keep that pride a secret. I think Stockburger understands this paradox.

Unlike my weekend-long foray into rusticity, Stockburger’s first collection of poems explores a woman’s full-fledged immersion into an anachronistic farm life. Her partner has chosen to turn his mother’s ancestral land in Beulah, North Carolina into a working farm, and she chooses it too but not without pause or inquiry: “I can’t tell if [he’s] working towards the past / or against, bare-backed, boots sticky with damp hay and mouse shit.” So, she dances between ambivalence and wild desire, between the ease of convenience and the boulder-hauling ache of “[giving] / [herself] away in blood and salt.”

But this collection doesn’t just chronicle the travails of a modern couple living off the grid; it also reveals a woman who struggles against her own outsider-status and against the requirements of a commitment to both farm and farmer. At times, she becomes restless, eager to forge her own relationship with the land.  In “How to Marry the Land,” the speaker must “abandon [her partner’s] scent in order to love “the way [her] body lies against the trenches on the hillside.” In “How to Live with Ghosts,” she imagines the land’s past inhabitants asking if “[she’ll] stay until [her] under-nails peel with black.” Aggrieved, she responds that she, too, has a family history.

Throughout this collection, Stockburger communes with ghosts, observes deer hunters, maxes out credit cards, and teaches herself plant names, images which are woven painstakingly through her textured lines: wild blackberry, mimosa, pennyroyal, boxwoods.

Becoming a farmer on century-old family land in a culture hell-bent on modernity leads the speaker, at times, to find solidarity with the dead. The button-up dresses of the farmer’s deceased aunt hang in her closet, and she tries them on, calls out to another deceased aunt, “Tell me, what does it taste like to rest in the curves of this landscape? / When I throw greens to our hens / or watch my farmer staring at the fields / with his seed catalogue, I feel the same silence / of the hills and when I’m walking the property, I could be anyone.”

Is feeling anonymous an inevitable outcome of living close to the earth’s cycles? In Nowhere Beulah’s epigraph, Wendell Berry, the Kentuckian farmer and prolific author, seems to think so. He writes: “And so you make the farm,/ and so you disappear.”  In the poem “Witness,” she and the farmer watch a white pine fall to the ground and feel their relative insignificance: “something opened in [her] / when the roots pulled / out of earth…The stories of land before / driveway, power line, shallow well.”  Any landscape is a palimpsest—a silent map with evidence of the people, animals, objects, and plants that lived and died on it; getting close to such a map might also make a person face her smallness, her replaceability.

In her pantoum “The Leavings,” Stockburger writes, “To stay behind as remains, if you could call it that, / Aches me.” In “Wesley and Elvina Settling, 1901,” she repeats “before” in anaphoric form to erase the unforgiving movement of time: “Before we made pickles…Before soybeans / and corn, before the logging roads grew up in briars.” The poem arrives at a final and tender scene from 1901, when on “nights, / [Wesley and Elvina] settled into love on a springy cot, her blonde braids unwinding over her freckled back, feral cats purring into the milky sky.”

To call Nowhere Beulah a coming-of-age collection would be reductive, although on one level it is a chronicle of becoming. Choosing to build a home with her partner on his family’s land inspires Stockburger to reclaim her own family’s history and to consider what she’s willing to sacrifice for love: “What I’ve come to know of love / is just a tractor blade / set to cut just above the soil, / Papa shaving his neck / with a razor while camel crickets / clicked in the basement.” Here, love and violence live in close proximity, the blade always too close to the blood or the soil.

As for the woman and the farmer, their love is intertwined with the farm and its metaphors, its seasonal sufferings and “stubborn fields.” In a world where rural land is subdivided and abandoned and where one drifts from home to home, the speaker knows she could relinquish her commitment to the farm, “drift into the blue / of these mountains, and “douse the squash in kerosene.” But she doesn’t.  In the final poem “At Dusk when I hear an Arrow,” Stockburger claims to finally understand when the farmer sings, “Summer’s coming, / love. Summer’s coming”—that in the anxious chorus of living and dying things, enough really is enough.

This morning in the tiny house, the pipes froze, and I had no wireless connection. Hunkered next to the space heater with Nowhere Beaulah, looking out the window at a ridgeline I couldn’t name, I realized that we, the uprooted, need more of Nicole Stockburger. 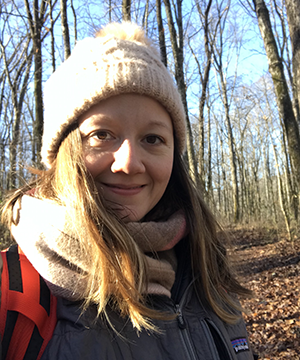 C.L. WHITE is a poet, journalist and yoga teacher living in Chattanooga, Tennessee. Originally from Gold Hill, North Carolina, she holds a BA from UNC Chapel Hill and an MFA from UNC Greensboro. Her work has appeared in Oxford American, Mid-American Review, Chattahoochee Review, New Ohio Review, Best New Poets, and Mississippi Review, among other places.