Because I was—and still am—an idiot, I volunteered to have a chunk of a bad novel critiqued in Bob Watson’s fiction workshop right away. At least that’s how I remember it. I do know that I had Bob for fiction workshop that first semester at UN C Greensboro. This was 1984. At the time Bob had contracted some quirky and mysterious ailments: His knee had gone out of whack, so he had to use a cane. Using the cane hurt his shoulder. A questionable orthopedist had rigged up some kind of gizmo that sent electric shocks to Bob’s knee when pain strengthened toward unbearable levels. It wasn’t difficult, even for unobservant me, to figure out when Bob needed to jack the control knob on the buzz machine— he’d be in the middle of some spot-on criticism, then veer off into what sounded close to tongue-speaking. Because I was from the middle of nowhere South Carolina, I wasn’t uncomfortable with his decision to speak in tongues. Later on when I took Bob’s course on James Joyce, I figured that he’d merely gone into a stream-of-consciousness mode the previous year.

So I handed in twenty pages of said bad novel, and Bob read it aloud to the class. Back in those days class members had to check out our comrades’ works at the library, sit in chairs up there, take notes, and so on. So I assume that everyone had read my supposed masterpiece. As I remember it, Bob quit reading about halfway through. He looked at me through those cool hornrim glasses and what I read in his facial expression wasn’t, “Why are you wasting my time?” like he should’ve asked. No, it was a kinder expression, but one that any face reader might interpret as, “Do you need some psychological help, son? We have a nice, free, clinic here on campus with certified counselors and psychologists there to help you out.”

Bob said, “I don’t know what to make of this, George. It made me really nervous. Who writes like this? It just made me nervous, and I had a hard time continuing.”

Of course, I thought I was going to cry. I sat there like a fool, waiting for my workshop buddies to come to my defense. When I finally got up the courage to look around the table, no one made eye contact. They stared down at their notebooks. I think that maybe Tim Sandlin said, “It made me nervous, too, and I’m pretty laid back most of the time. Hey, Bob, can I go feed my dog?”

Bob smiled at me and said, “Keep going.”

And I did. I didn’t want to let him down. The worst feeling in the world, I believe, is letting a writing teacher down. So I wrote and wrote and wrote—learned not to hand in every little piece of crap that came off my typewriter’s carriage—and listened to Bob more often. I listened to him say how one needs to be a poet in order to be a fiction writer, and vice-versa. He told great tales of his time in Provincetown; of knowing Mr. Jarrell; of having hippie women bring Betty and him homemade bread way out in California when he lived for a while near a place called Spahn Ranch. I swear to God one time I saw Bob driving that convertible of his in front of Friar’s Cellar on Tate Street, then way out by the airport thirty minutes later, eyebrows in the wind. Was he following me around? I wondered. Was he making sure I didn’t screw up every minute of my life? Who was this man forever thinking, in search of both enigmas and answers?

That’s how I remember Bob Watson. As it ended up, he needed that shoulder to heal so that he could extend that wing out and take all of us under it.

And then there was the time that he hired me out to bartend at a party at his house. I sliced my finger badly on a lemon. Bob put a butterfly bandage on it, and told me to be careful with knives. I’m still learning from him. 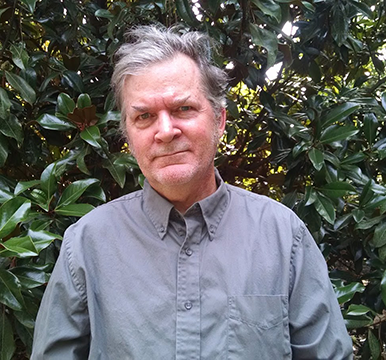 GEORGE SINGLETON has published eight collections of stories, two novels, and a book of writing advice. Over 200 of his stories have appeared in magazines such as the Atlantic Monthly, The Greensboro Review, Harper’s, Playboy, the Georgia Review, the Southern Review, the Cincinnati Review, and elsewhere. He is the recipient of a Pushcart Prize, a Guggenheim fellowship, the Hillsdale Award from the Fellowship of Southern Writers, and the Corrington Award for Literary Excellence. He lives in Spartanburg, SC, where he holds the John C. Cobb Chair in Humanities at Wofford College.